The Story Of Bernard

At the Zambezi Queen Collection, we look forward to hosting our guests with friendly, insightful and happy service. Hospitality is at the core of our purpose and we strive to make sure our guests have the most memorable time and return again soon.

We are proud to introduce you to a fellow guide and main host onboard the Zambezi Queen, Bernard Kalba. 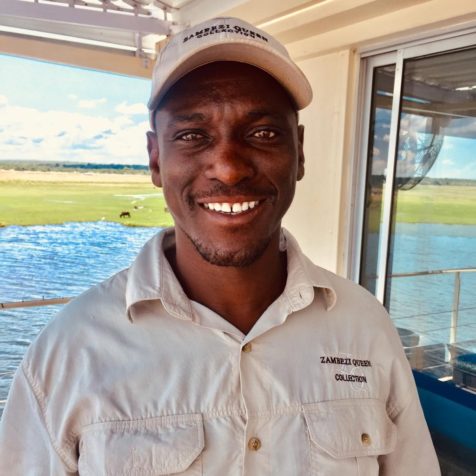 Bernard grew up 30km away from where the Zambezi Queen is moored in a small rural village called Ijambwe. His father was a fisherman who taught Bernard fishing techniques passed down from his father, on the great Chobe River. Bernard has a large family of 5 brothers and 4 sisters who still live in the village and he visits frequently. The Chobe River really is his home.

Getting to know him

His working career started a year after high school working night shifts as a security guard. After three years in security, he yearned for the outdoors and wanted to be closer to the river he called home.

He searched for jobs in the hospitality industry as he was curious about foreign places and different cultures. He got a job as a groundsman at the Ichingo Chobe River Lodge, making bricks and looking after the area around the lodge.

While there, he enrolled in the training programme to learn more about making drinks and preparing food, which led to another change in his career. With his outgoing personality and friendly nature, Bernard settled quickly into his role as the head barman.

Within a few years, he used his “I can do anything” attitude to apply for the role as host and guide on the Zambezi Queen and has been working in this role for the past 9 years.

Bernard will welcome you on board the Zambezi Queen and provide you with your safety briefing as well as a map talk which is a great introduction to the area and the history. Make sure to ask him to show you the stars of the viewing deck at night time!

In his spare time, he enjoys looking up and studying the stars, reading his Bible, reading more history books and being outside. Bernard is well known at his local church as one of the preachers and key contributors to the community’s Christian efforts.

A word from Bernard himself

“On the job, you have many fun and exciting stories. You can look out the window and see a lion sitting on the side of the river or at night time see the milky way in clear sight.”

One of the more frightening stories he shared with us was when he took out a couple of German guests on a guided river safari. They drifted slowly down the river, staying quiet so as not to scare away the birds.

Bernard was talking about one of the birds while keeping his eyes peeled as he had started to feel uncomfortable. All of a sudden, he saw a movement in the water and a hippo threw his enormous head onto the side of the boat making a big bang with his open mouth!

Bernard quickly put the boat into full speed and sped off. The guests were frozen in shock. In the end, everyone had an adventure and no harm was done, but he made sure to offer them a stiff drink when they returned to the Zambezi Queen. They had earned it!

We’re very lucky to have Bernard and his outgoing personality as host of the Zambezi Queen and we look forward to many years of adventures with him. 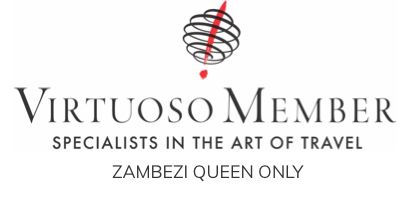